I’m feeling blue. In fact, I feel more than blue. I feel utterly depressed. After three months of following Bruce Springsteen around the world, I went to my final concert on Saturday at Hyde Park. No band has ever made me so excited as Bruce and the E Street Band. No band has ever made me feel sick in anticipation of a concert. No band has ever had me on my feet for 17 hours, queuing from 5am. And now it’s all over.
I’ve spent the last four days moping. Moping about the flat, moping at work, and talking about Bruce to anyone who’ll listen to me. As I sit here writing, I’m scanning the latest tweets from the concert in Dublin. I’m cursing myself for not being there and feel jealousy creep over me as the set list unfolds.
My friends and colleagues look on at me in despair as I distractedly try to function. I scour YouTube at work, plugging in my headphones and listening to old concerts, shutting myself off from the world. I show my photos to everyone, sliding through hundreds of pictures of the same blurry figures. I’ll speak about the E Street Band to anymore who will humour me with a moment of interest – “Isn’t it so funny that they opened Dublin with the remaining part of Twist and Shout…” My excitement falls on deaf ears.
The nights are the worst. I sit in silence analysing set lists, reading reviews and looking at photos.
Other Bruce fans will appreciate that it’s the ‘unknown’ that makes the aftermath of Bruce concerts so difficult. When will we next see the band play together again? When will we next queue for hours to have the best 3 hours 30 minutes of our lives? When, if ever, will we hear that off the wall song we’ve always longed for? The uncertainty hangs over me and I don’t know how to handle it.
Fellow fans, I am seeking solace from the fact that you must be feeling the same way? If you’ve got the Bruce Blues too, just Raise Your Hand… 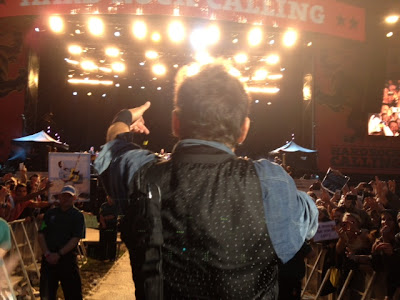