Burger Review: The Hole In The Wall, Cambridge

The Hole In The Wall Burger

London is all about the burgers at the moment but sometimes you just want to escape the big smoke and get away. I recently got out of town and headed to the countryside of Cambridgeshire to hunt down the best burger the area has to offer.

My journey took me to an off the beaten track pub called the Hole in The Wall in Little Wilbraham. It’s about 60 minutes from London by car and well worth the journey for a brilliant burger in a great location. There are some amazing burgers in London, but if you are looking for a truly exceptional and different burger experience, along with some fine ales and countryside air, then the Hole In The Wall burger is the one for you.

The pub/restaurant is run by two young chefs relatively new to the restaurant scene (they have owned the Hole In the Wall a year or so). The Head Chef is that friendly bearded face from the Masterchef final in 2010 – Alex Rushmer. His cheffing partner is Ben Maude, Alex’s university friend who brings a new style of cooking to the restaurant from his time spent living in Tokyo and Hong Kong. The chefs have put together a creative menu and the burger is one of their carefully and lovingly crafted dishes.

Now, I mention that this burger is different, and it really is. When I say different, I don’t mean a load of wacky sauces; it’s about the overall taste of the burger. There are so many elements to this burger I think it will be easiest if I break it down so I can be really thorough. 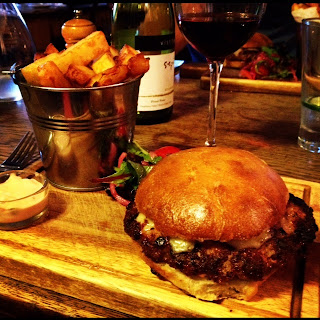 The bun
The chefs set the bar high with their bread and bake their burger buns on site to ensure the very best quality. You have to raise your hat to them for this – there’s some good burger buns out there but the majority have been shipped in from an expert bakery. Full marks to the chefs for making their own bun, which was soft and bouncy, yet firm enough to hold it together throughout the eating process – which was helped by it being toasted on one side. With a bit of sugar and a high level of fat (cripes), the slight sweetness of the bun contrasted nicely with the rest of the burger. In fact, I would go as far as to say that this is the one of the best burger buns I’ve tried. It didn’t let me down like buns often do.
The patty
This is where the burger realllly starts to get interesting. This is one of the purest patties I have ever tasted. The focus is really on the meat here, the Hole In The Wall buy their steak locally from Gog Magog. Using the highest quality steak mince, the fat content is then added to the patty with minced pork belly. Not only this, instead of adding a slice of bacon on top of the burger, the bacon is also minced into the patty, creating the most heavenly flavour combination when the three are combined. The moistness of the patty is incredible, thanks to the addition of soaked bread instead of breadcrumbs and the very finely sliced onion. The patty isn’t thick, which did concern me slightly, but the combination of meats makes it more than filling.
Alex is half Swedish and you can really tell when you eat this burger, the patty tastes very similar to some of the tastiest meatballs I’ve eaten in Sweden, due to the pork content. It sounds strange but the patty tasted really clean – the quality of the meat was so good that although I’m sure the nutritional value isn’t great, it didn’t feel like the kind of burger where you feel shit and unhealthy at the end. Patty points!!
The cheese
‘Shit cheese!’ No not because it tastes bad or because of the quality, but because when I enquired about the type of cheese they use for the burger, this is what I was told. Shit cheese can be easily translated to mature cheddar. It is grated on to the patty after the patty has been fried on both sides, before a short oven session where it melts and oozes down the side of the patty. Glorious. 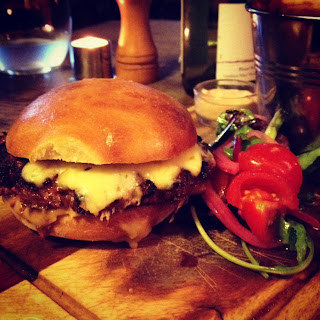 The onion butter
Why do onion when you can do onion butter? Taking on the classic flavour combination of beef and onion, the Hole In The Wall adds its own twist. Almost a puree, it doesn’t add the same texture element as rings of red onion would, but it still delivers that onion flavour in a richer onion butter.

The salad
A small salad was served on the side with tomato and pickled red onion. Dressed in vinegar, even the salad was incredible and the crunchy texture of the pickled onions combined with the sweet and sour really counteracted the richness and softness of the burger. There’s nothing worse than a sad looking salad, so I was relieved when this looked and tasted so good.

The sauce
The sauce is served in a pot on the side and included things like capers, pickled shallots and gherkins. The interplay between sweet and sharp works really well and it adds a welcome twang to the burger, where you can control how much you actually want to taste. I would recommend keeping the sauce on the side and spread a little on every other bite, because the sauce is so good you want to save it for your chips, and appreciate the pureness of the burger without any other flavours taking over.

The chips
Oh the chips! I’ve eaten great burgers but often felt the chips have been bit of a let down. But these are without question the BEST chips I have ever tasted. Just look at them! Triple cooked to perfection, I did not want these to end. 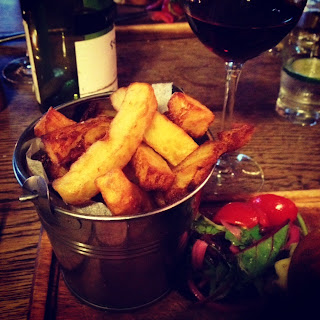 Overall
You can tell that the chefs behind The Hole In The Wall haven’t just put the burger on the menu for the sake of it. These guys are meat lovers but creative cooks. The burger is a well thought out dish and most importantly it’s in keeping with the rest of the food and philosophy of the restaurant, creating dishes that are interesting and fulfilling. The burger is sensational, the perfect meat combination, soft bun (baked on site) and the most moorish chips going. At just £12 for burger, chips and side salad, it’s a steal.
Not only that but the setting of the Hole In The Wall adds to the burger greatness, it’s a cosy pub that also has a sunny beer garden – a perfect burger choice for any time of the year.
The Hole In The Wall, Primrose Farm Road, Little Wilbraham, Cambridge CB21 5JY
01223 812 282
www.holeinthewallcambridge.com